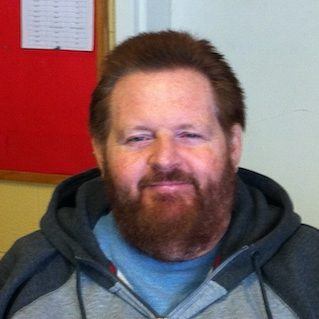 Since its founding in 1974, Providence In-Town Churches Association has helped countless people struggling with hunger and homelessness, including one of their own employees, George Gaffett. At the time he was hired George had been homeless for five years—at one point even spending the winters on the sidewalk outside the Providence Civic Center with his two small dogs.

I arrive just before PICA’s Downtown Food Pantry closes; although I pass people on the way in, the church basement is nearly empty. Settling into a chair in the back row, I watch as the last few people receive their bags of food.

As I wait, the innocent giggles of children begin to echo through the large Hayes Street hall. Two young girls, tired of waiting for their mother, leap to their feet with a burst of energy that only children have.
“You’re it,” the slightly older girl joyfully shrieks as she touches her sister’s arm and darts off.

While the children play, winding through a maze of folding chairs, their mother stands at the food distribution window holding open a well-worn green tote. She verbally guides George’s hand from shelf to shelf selecting the food her family will eat over the next two weeks; cans of soup, vegetables, and boxes of pasta fill her bag.
Remarkably, this family’s visit is only a small sample of the more than 6,200 people PICA feeds every month, and many of them twice. Feeding that many people takes excellent organizational skills and a supervisor who possesses a sincere drive to help others—PICA’s Executive Director Diana Burdett found those traits in George Gaffett.

Diana likes to tell the story of how she was looking to fill the supervisor’s position after an abrupt vacancy. She decided that while she interviewed candidates George could temporarily fill in (if you ask George he’ll tell you he was filling two positions). Either way, it soon became evident to Dianna that George was a perfect fit; using a grant awarded to PICA by United Way of Rhode Island she secured his salary and offered him the job.

After getting their food, the woman and her two children walk back out into the cold January air. Once again, my attention turns to George; his shoulder length hair frames the smile on his bearded face. He greets me, his speech is soft and calm—I find it surprising that the turbulent years have not left their mark by leaving gravel in his voice. He begins to share with me what his life was like before his sudden homelessness, as well as the events that led to life on the streets.

In 1999 George lived in sleepy Pawtuxet Village happily sharing his childhood home with his two small dogs—a year later everything changed. The manufacturing plant where he had worked for over a decade unexpectedly closed, leaving him without an income. Living on his credit cards he searched for work, but soon, at the age of 39, George was homeless.

Since homeless shelters do not allow pets his options were limited. Except for the intermittent luxury of staying on a friend’s couch, George and his dogs spent most nights sleeping outside. He spent the next five years living this cycle over and over again. Looking back he admits that some of his experiences were made worse by his own “youthful stupidity,” but he also appreciates that the hard times made him who he is today.
The strength and humility he demonstrates, telling a stranger about a dark time in his past in the hopes of helping others, compels me to share my own story with him. Breaking an uneasy silence I muster the courage and tell him of my own brush with homelessness; a short period of my life that, besides my wife, no one else knows about. Prior to joining the Army at twenty years old I spent two years without a home, often sleeping outside, in unlocked cars, and in the stairwell of the Biltmore Hotel. Making eye contact George smiles, “Staying in the hallway of the Biltmore was genius” he says, “not many homeless people can say they’ve lived there.”

Finding humor in his own difficult past, as well as the past of others, shows that George has grown a lot in the nine years since Diana asked him to temporarily fill in. As he looks back at his own hardships, it’s clear that George has learned valuable life lessons from them. Now living in East Providence, he shows his appreciation for the opportunities he’s been given through his kindness, compassion, and service to the people he helps feed, including the woman and her two little girls.